Skip to content
You are here:Home-articles-DeckChair Lets Students Cruise Through Learning 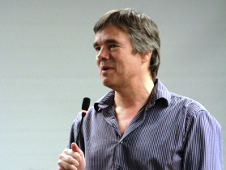 Dr. Jeff Graham teaches psychology at the University of Toronto Mississauga, the place where one can see DeckChair, Graham’s online learning program, in action. It’s a tool he sees changing the landscape of education.

The original program was developed in 2002, as a simple tool for running surveys and experiments with first-year psychology students. It worked fine, but with Graham’s background researching how children learn math, he realized that his program could be modified into a perfect system for teaching.

As Graham developed DeckChair, he applied for an ITIF grant in 2005, so he could hire a student to help him out. “I really couldn’t have done it without that. ITIF funding helped get the initial concept developed.”

Then the U of T innovations Group, (now the Innovations and Partnerships Office in Research Services), which helps commercialize UofT professor’s inventions, helped Graham form DeckChair as a company.

So what is DeckChair?

Ultimately, it’s Graham’s attempt to solve one of the most fundamental issues of education: the fact that students in the same class don’t have the same level of knowledge, or learn at the same pace, and yet all of them must get through the same curriculum.

“The problem in a classroom is that you have to aim for the middle,” Graham explains. “You bore the good kids, and it’s still hard for the others.” It’s an issue teachers have always wrestled with, but it’s almost inevitable that some students will lag behind, and this effect can snowball over the course of a semester or school year.

So how do you teach to the level of each student? Graham worked to give DeckChair an adaptive algorithm that customizes learning content based on a user’s strengths and weaknesses.

It can do this because it times every movement as the student clicks through the lessons. When the student logs into DeckChair and selects their lesson, right off the bat, the software logs how long it takes the student to read the initial paragraphs. With more use, this can serve as a reliable measurement for how fast the student is reading. Graham points out that this can customize learning by letting students figure out in advance how long it will take them to read textbook chapters—but that’s not all.

By getting a good measure on reading speed, DeckChair can use that information to see how much time a student spends reading, and how much time they spend thinking. So with a multiple choice question, instead of only knowing if the student got the right answer, DeckChair tracks the amount of time that the student spent thinking about the answer itself.

For Graham, this is key, because it brings in a measurement of skill. He gives the example of someone answering a simple multiplication problem: what is 6 times 8?

“If you take half a second, you’re retrieving the information. If it’s 3 seconds, you’re adding the numbers up in your head. Immediate and fast retrieval is the key goal. Mastery involves skill and speed.”

It wasn’t easy getting this whole thing off the ground. By 2008, DeckChair, the company, employed five programmers in its office, but just one year later the cold reality of running a business had faded that initial glow, and the company was out of money.

“So we had a half-built system and no money,” Graham says of DeckChair at the time. But it was hardly cause for giving up.

By 2010, Graham and his partners found some personal investors that helped the company start up again. One year is a long time to be out of the game in the tech world. They had to rebuild everything from scratch.

By then, Graham was so taken by the potential he saw for DeckChair that he took it to the very top of the University. He found himself at the door of UofT President David Naylor’s office. After overcoming some nerves, Graham marched in and told him about DeckChair. Naylor wound up writing a reference letter that helped the company get enough funding to take it to market.

Two years later, Nelson Publishing, one of Canada’s biggest textbook companies, took an interest in DeckChair. Graham had built up a reputation with Nelson from a previous work back in the 1990s. Now, Nelson is set to use DeckChair as a supplement to its textbooks, which it produces for grades K-20.

Graham’s goal for DeckChair in the education world is one of “complete learning customization.” To do this, he sees instructors using the program to measure student’s skill in a subject area, and then, based on that assessment, branching the lesson off into different areas. Maybe the student shows clear understanding and passes a certain speed and accuracy threshold, so they move past a few basic lessons. Maybe they need to go back and re-learn a certain lesson. There could be a host of different paths that each student could take through the material that allows them to learn it best.

Of course, this all depends on a host of variables that need to be defined in advance. How do you determine the right thresholds for students to pass? How to you measure your ideal balance for speed and accuracy? DeckChair can be adjusted to take speed and accuracy into account in whatever ratio works best (for example, for paramedic training, speed is more important than it would be in a math lesson). Graham sees DeckChair solving the answers to these questions itself, by collecting data that the instructors can use to constantly improve the way they use the program.

Graham also sees DeckChair as a tool that instructors can use to constantly redesign their curriculum. By using it to collect data on how students are progressing through the material, instructors might be able to determine which parts of their curriculum need tweaking, and what the best way might be to do that.

“It’s research on teaching,” Graham says. “Is your teaching working? You can use the system early on to evaluate your own curriculum before the whole semester is gone. Usually studying effectiveness of teaching is hard, and requires control groups. This is easy.”

There’s a long way to go before that reality, however. Right now, DeckChair is only used in Graham’s own psychology classes, and as a way to test incoming English Language Program students to place them in the right class.

But don’t expect Graham to let up anytime soon.

“I am ridiculously optimistic. I built into this all my psych learning knowledge. I went with my gut. I never gave up.”