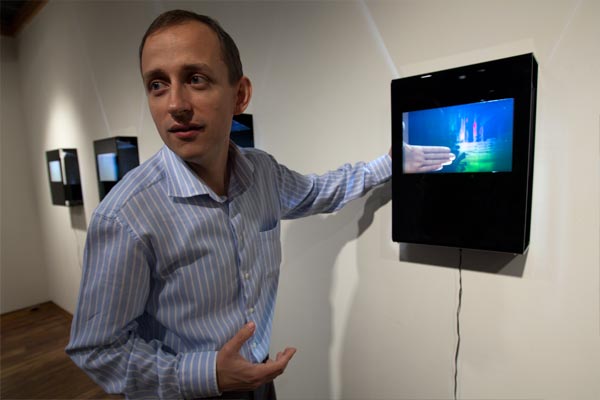 If I told you that the practice of holography produces holograms, well, technically, I’d be right. But I’d lack the poetic flair of U of T Optical Sciences professor Emmanuel Istrate.

He calls them holograms too naturally, but he also has another phrase — Windows with Memory.

Istrate teaches a 12-week holography course, offered once a year to around 40 undergraduates, from his backroom lab in the McLennan Physical Laboratories building. There, students from a variety of different academic backgrounds learn everything they can about holograms, before creating their own at the end of the semester.

Holograms have been around since the 1960s, when the first real object holograms were developed, Istrate says. These kinds of holograms record actual physical objects, in their original size.

In its simplest form, a hologram is similar to a picture. It gets developed on a special micrometer-thin film, which is usually attached to glass so that it can be handled. Unlike two-dimensional pictures, however, in which the camera lens focuses a wide array of light into a single point, holographic film records a scattering of laser beam light from all angles.

This allows the image itself, once it’s projected in its display, to be seen from all angles—thus providing that captivating third dimension. Or rather, that window with a memory.

The custom-made lab setup used to capture these holograms requires a laser beam light source with a series of mirrors placed at specific points facing specific directions, all set out on a table in a dark room.

Real-object holograms, however, can be very limiting. There’s only a certain amount of space to capture an object. So while it’s possible to capture an interesting scene of playing cards and chips, it’s functionally impossible for Istrate to capture something like a car, or a streetlight, or even a golf club.

Starting in the 1990s though, Istrate says, digital holograms—with three-dimensional computer images—began to be developed.

“Digital holograms can be manipulated to be any size, so they provide lots of freedom. You can present abstract ideas, not just the objects in a studio. That’s the value of digital.”

While digital holograms provide more freedom, there’s still plenty of creativity involved in arranging the real-object holograms. This often makes holography as much of an art as it is a science—and that’s what Istrate finds to be one of the greatest values of his craft.

Istrate says, “people noticed the value of holography. We decided to exploit it at the student level.”

What was being exploited exactly? As it turns out, holography is an ideal blend of art and science when it comes to teaching.

So the first goal of Istrate’s holography course is to teach the science of optics with more holographic applications than dry equations, which attracts students of all disciplines—many without a science background— to the course. This in turn leads to Istrate’s second goal: getting art students and science students to work together.

“They kind of avoid each other usually,” Istrate says. “It’s a pity. When you get a job, you need to work with other kinds of people.”

Istrate encourages this collaboration with his teaching style, which he describes as “very hands-on.”

“I spend time with the students, everyone knows everyone, and they spend lots of time in the lab, getting to talk with each other.”

Istrate admits that the goal of getting art & science students to collaborate isn’t very tangible. But there are some things to hold on to. Istrate says his class does exhibits at the U of T Art Center. And this year, some students got so excited about the course that they organized an exhibition for the Nuit Blanche art festival, and started a crowdfunding campaign for it.

The final project Istrate assigns—a digital hologram produced by each student, based on a photograph— is not a collaboration. This fact, combined with the Universal Law of College Student Procrastination, led to a big problem a few years ago. Istrate’s entire class would show up on the day projects were due, leaving one computer under the deluge of hundreds of files being transferred at once.

“It was unwieldy to handle this all right before the deadline,” Istrate says. “We wanted to make this a lot more automatic.”

With a better program for submission of these files, Istrate could give better feedback more quickly, and students could get their final work in with a better resolution.

So the ITIF grant he won helped hire programmers to create software to process student hologram files, and hardware to transfer those files to the actual film. Now, students can upload their projects from home, instead of cramming the lab in a panic. Which means they also get more time to work on their projects.

“Professional photographers take a thousand photos and submit one. But our students take just one to submit,” Istrate says. “So we really wanted the equipment to get them the best shot.”