Skip to content
You are here:Home-articles-Teaching with Video Games

The beginning of the millennium was a famous time for video gaming. Sony’s PS2 and Microsoft’s Xbox consoles signaled the final turn for gaming from rudimentary arcade stands to high-powered home machines. The most popular titles included classics like Grand Theft Auto Vice City, Madden NFL 2003, and Kingdom Hearts.

But at the same time, none of these supposedly innovative games could do what UTSC anthropology/health studies professor and 2013 President’s Teaching Award winner Larry Sawchuk’s new game could do: teach advanced epidemiological principles to university undergraduates.

So in 2003, he went to great lengths—winning an ITIF grant and working with a computer programmer—to make sure there was a way his students could learn epidemiology in an interactive virtual environment beyond the raw statistics.

His game, titled “Outbreak,” is set in a nameless, disease-ridden 1890s American town. Students act as investigators, interacting with townspeople and using their powers of observation to collect valuable information about the disease, how it spreads, and whom it affects.

“For 10 years ago, this was pretty cool,” Sawchuk says. But don’t let him fool you into thinking it’s utterly outdated. The game has some pleasant hand-drawn graphics and animations, which, while undoubtedly past their prime, still hold up to this day. But how did it work, exactly? 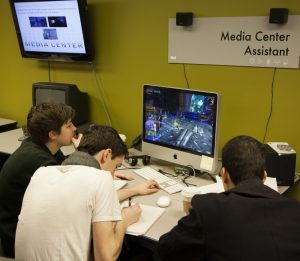 “There was a lot of narrative built into the game,” Sawchuk explains. “It’s trying to introduce students to risk factors for disease.”

Sawchuk motions towards the screen, where his character has come upon the town well. It’s surrounded by animals, piles of dung, and flies.

“The game is certainly throwing it in your face. But the student should be making the connection about the ways a well can be polluted, rather than having it thrown at them in the form of a lecture.”

Sawchuk didn’t stop there, though. He went to the drama department, and set up a collaboration where students actually filmed scenes to be shown as videos in the game.

“There’s all kinds of stuff here to get students involved.”

Sawchuk says the game was pretty successful—it was used in a large 500-person class for a year. Sadly, the game met its end when Sawchuk stopped teaching the course, and there was no way for him to continue developing the game.

There is one kernel that lives on today, though: the in-game calculator, which Sawchuk says is distributed freely to students. And he’s still happy with his original product.

“I think it was a great success. In that one year period, it worked beautifully.”

Despite the many limitations in budget and time that came with developing a tool that only wound up being used for one year, Sawchuk thinks it was invaluable for his career.

“I never would have won a teaching award without things like this.”